This Week in Review will be taking a look at two brand new radio stations. One targets tradespeople and the other allows users to create and upload their own radio show. In other news, more and more radio stations are using dashboard displays as an advertising platform. Additionally, internet ad spend in the UK has surpassed £10bn! 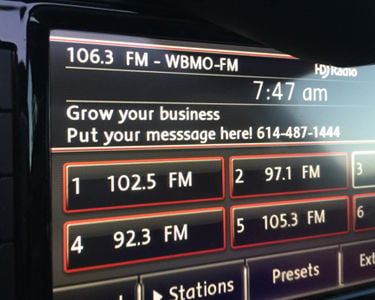 More and more radio stations are putting adverts in the messages that scroll across the dashboard display on car radio receivers. Most stations have been using Radio Data System technology to display artist and song info or the station’s name and logo. However, for savvy operators, such as Beasley Broadcast Group and CBS Radio, the technology is being used as a form of marketing. Broadcasters can use RDS technology as both a station-branding platform and a growing sales tool.

New radio station Fix Radio, which will launch this Wednesday (26/04/2017), will give away 20,000 bacon butties over the first 40 days of broadcasting. The station, aimed at tradespeople, will provide “music and cheeky banter” according to the owners. Three branded bacon butty vans will visit 1,400 building sites serving free hot food and promoting the new station.

Despite the masses of advertisers who have pulled money from YouTube amid concerns that their ads were appearing next to offensive videos, internet advertising spend has surged above £10bn in the UK last year. Companies have more than doubled the amount they spent on mobile video ads. The overall trend is for growth. Last year’s increase, the biggest since 2007, was fuelled by a boom in mobile ad spend. Ad spend rose by 51% to £3.9bn.

Upload Radio, a new radio station, which launched today, allows users to create and upload their own radio show. The digital radio station gives podcasters, individuals and also businesses the opportunity to buy an hour of airtime to broadcast anything they want, withing Ofcom guidelines. Upload Radio will be available on DAB in Surrey, Wrexham and Gloucester, and each area will follow their own schedule. At the moment, Upload Radio charge a small fee of £20 for an hour-long show for each area. This gets the show broadcast on DAB Radio once and then it’s available online for 30 days after broadcast.