Digital audio broadcasting (DAB), also known as digital radio and high-definition radio, is audio broadcasting in which analog audio is converted into a digital signal and transmitted on an assigned channel in the AM or (more usually) FM frequency range. DAB is said to offer compact disc (CD) – quality audio on the FM (frequency modulation) broadcast band and to offer FM-quality audio on the AM (amplitude modulation) broadcast band. The Norwegian Broadcasting Corporation (NRK) launched the very first DAB channel in the world on 1 June 1995 (NRK Klassisk), and the BBC and SverigesRadio launched their first DAB digital radio broadcasts in September 1995.

Internet radio (also web radio, net radio, streaming radio, e-radio, online radio and webcasting) is an audio service transmitted via the Internet. Broadcasting on the Internet is usually referred to as webcasting since it is not transmitted broadly through wireless means. Internet radio involves streaming media, presenting listeners with a continuous stream of audio that typically cannot be paused or replayed, much like traditional broadcast media; in this respect, it is distinct from on-demand file serving. Internet radio is also distinct from podcasting, which involves downloading rather than streaming.

DAB Rules Digital:
Rajar’s latest data release states that – Listening to radio via a digital platform in terms of weekly reach has increased by 4% year on year, with 27.1 million people now tuning in to radio via a digitally enabled receiver (DAB, DTV, Internet) up from 26.0 million in Q1, 2013 in the UK. 51% of the population tune in to digital radio every week. 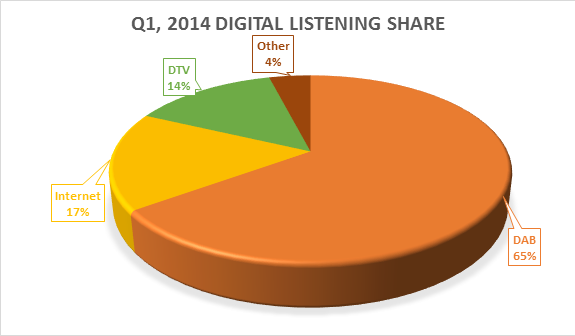 The Main Question:
Now the question which arises is that in the near future can DAB and Internet radio coexists or will it be the survival of the fittest?
Recently the Australian radio industry has reacted strongly to a recommendation the ABC and SBS drop its digital radio (DAB) services and the flow on effect of digital radio not rolling out to regional areas. The Department of Communications’ efficiency review into the public broadcasters recommended “significant savings over time could be realised if digital terrestrial radio services were no longer provided, with online and mobile alternatives maintained”. It also noted that “digital radio is a supplementary service that operates alongside AM and FM radio” and that “the vast majority of digital radio content is duplicated in analog radio, online, on mobile apps or on digital television”.

Radio executives suggest the ABC abandoning the DAB+ format would kill digital radio in this country. The proposal is viewed as “disastrous”, coming after a consumer education program and major investment from broad casters. Commercial Radio Australia and its members note nearly 1.7 million Australians now own a DAB+ compatible radio and the percentage of overall radio listening on DAB+ devices is approaching 20 per cent. The obsolescence of millions of DAB+ devices would be a political headache.

The government has indicated privately it does not know where funding will come for the rollout of rural digital radio services within current budget constraints, and most regional operators, some of them only one to three station owners, will not have the resources for digital rollout. Already a number of regionals have switched off their digital simulcasts as the dispute with the Phonographic Performance Company of Australia over additional fees for digital simulcasts continues.

The radio sector is also increasingly sceptical of the viability of internet streaming for radio listening, despite growing online audiences. The cost to listeners of data streaming becomes consequential and a recent broadcaster white paper into the Swedish broadcast sector estimated if all radio listening was transferred to the cellular data networks, there would be no room for any other data.

So, the answer to the question is only time will tell if DAB will continue to Rule the Digital streaming or not, but the current odds are in favour of Internet Radio.