The Infinite Dial study uses the “gold standard” of nationally representative survey research. The study has become the report card on digital audio and other digital media.

Online radio listening in car is up by 3% from last year with 4 in 10 Americans 12+ saying that they have listened to internet radio in car by listening to the stream from a cell phone that they have connected to a car audio system. 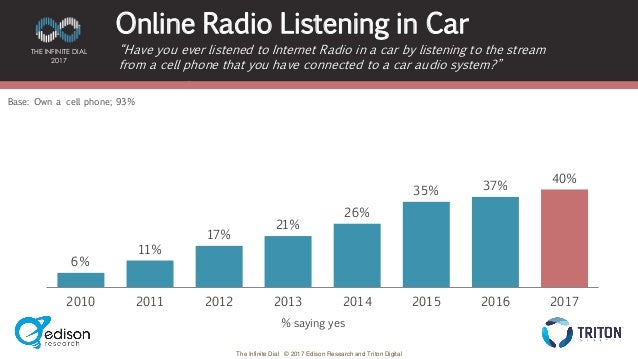 According to the data, 86% of respondents were aware of Pandora, followed by iHeartRadio with 71% awareness. Spotify came third with 62% and Apple Music and Amazon Music followed closely with both at 60% awareness.

Furthermore, 32% of respondents said they had listened in the last month to Pandora, but Spotify is a strong second at 18%. iHeartRadio followed with 13% having listened to them and Apple Music only had 8% listening to them in the past month. 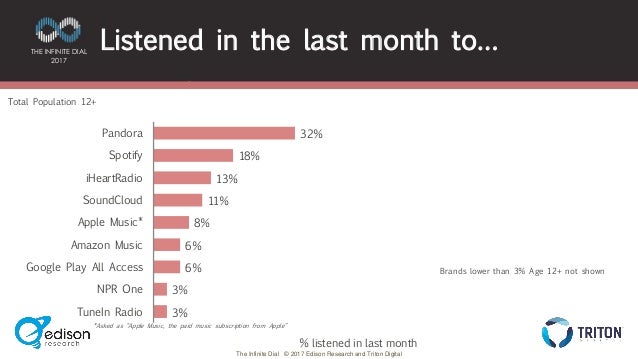 It was interesting to see that the top audio brands were those who made their own content, for example Spotify (who make their own playlists) and Pandora (who tailor their music for each individual). The less popular audio brands, such as TuneIn Radio just played different radio stations without input.

This concept can equally be applied to radio stations. The stations that own their own app and regularly post content to it to engage their listeners tend to be more successful. The stations who are just available to listen on other apps (such as TuneIn Radio) tend to be the less successful ones, as they have no additional  content and thus have less means of engaging with their audience.

Recognition of podcasting has continued to grown. The Infinite Dial has shown that familiarity with the term ‘Podcasting’ has gradually increased over the past decade. Now, 6 in 10 Americans 12+ now familiar with this word. This is up by 11% since 2015.

Podcast listening has also been on a gradual increase over the past decade, with 40% of Americans now having ever listened to a podcast, a number which has risen by 10% since 2014. 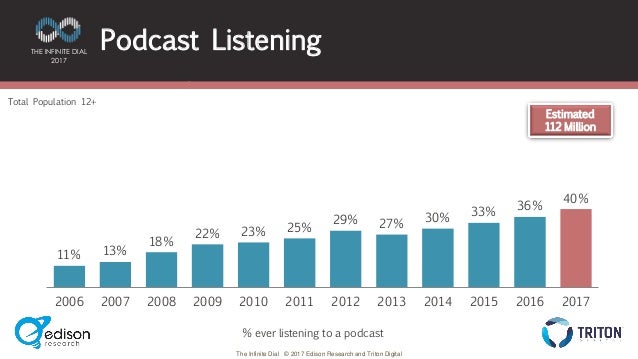 Nearly one in four Americans 12+ (24%) have listened to a podcast in the last month, an estimated 67 million. Additionally, an average of five podcasts are listened to per week based on weekly podcast listeners.

52% of Americans who have even listened to a podcast say that the location in which they listen to a podcast most often is at home. This is followed by 18% saying their top location is in car/truck and another 12% saying at work.

Radio continues to dominate in car audio sources. 47% of Americans 18+ who has driven/ridden in a car in the last month said the audio source listened to “most” or “all” of the time in primary car was AM/FM radio. This figure is down by 6% since last year. Owned digital music follows AM/FM radio, with 19%. 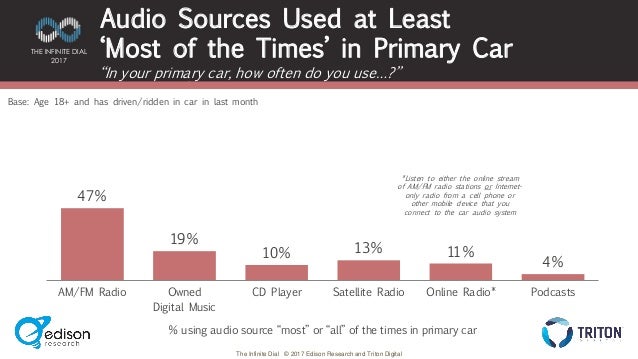 The younger generation, those aged 12-24 years, use Snapchat the most, with 79% using it. Facebook closely follows, with 76% and Instagram has 73% of Americans 12-24 using the social media site.

The social media brand used the most often based on Americans who currently use any social networking brand is Facebook, with a whopping 62% share. This figure is up by one percent since last year. Snapchat and Instagram both follow in joint second with a 9% share each. 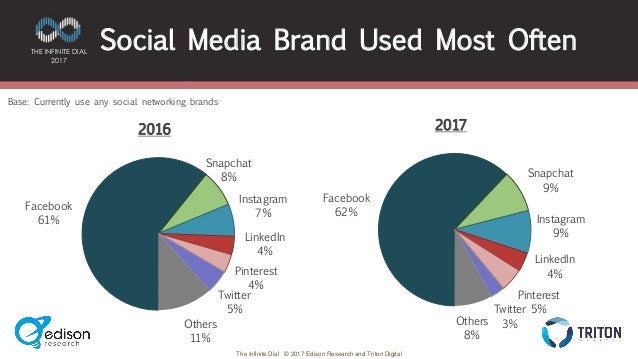 The Evolution of Car Audio – 1922 to Present Day | Infographic

Car audio has evolved a lot since 1922, when the only way to listen to music in your car was via the radio.

Chevrolet introduced the first car radio in 1922 for $200. The antenna covered the whole of the car’s roof and the batteries could hardly fit underneath the front seat. The two huge speakers which were attached behind the seat were also a huge inconvenience.

Now, we have internet radio, satellite radio, electrical, Bluetooth connectors for portable media players as well as in-dash slots for memory cards which are all competing with the CD and FM radio.

Check out this infographic to find out how we got to where we are today.

To learn more about the connected car and how it will affect the future of radio, see our eBook.

Take a look at our eBook for more information.

Today, March 8th 2017, is International Women’s Day 2017. This year, the campaign theme is Be Bold For Change, aiming to forge a better, more inclusive and gender equal working world.

Naturally, this post will be focusing on the working world of women in radio and how these women have helped shape radio.

The first woman to have her own radio show was Kate Smith in 1931. She began with her twice-a-week NBC series, called Kate Smith Sings, and later expanded to six shows a week. From 1937 to 1945 she led The Kate Smith Hour,  the most popular radio variety. Her final radio show aired in 1958.

Pegeen Fitzgerald is said to have “pioneered the at-home radio format” (The New York Times). Known as the First Lady of Radio Chatter, Fitzgerald first began broadcasting a radio show with her husband from their New York City apartment. They were the highest paid radio duo and earned roughly $160,000 a year. Their shows covered topics ranging from book reviews and current events. They would also broadcast themselves bickering with each other.

The first women to anchor a national nightly news programme was Susan Stamberg, who hosted NPR’s All Things Considered from 1972 to 1986.

The first African-American woman to own her own radio station was Dorothy Brunson. She bought Baltimore’s WEBB in 1979 before adding on stations in Atlanta and North Carolina. Dorothy Burson then sold off her radio stations in 1990, eleven years later, to establish WGTW-TV.

Currently, there are many notable female radio hosts. Ellen K has been hosting The Ellen K Morning Radio Show on KOST since 2015. She begun her radio career in 1975.

Another notable radio personality is Dr. Laura Schlessinger whose radio programme gives personal advice to callers. She begun her radio career in 1995 on a show called KABC.

It is obvious that excellence is not limited by gender. However, although many more women today are being heard on radio and occupy leadership positions, they still have a long way to go. According to Sound Women, only 1 in 5 solo voices on the radio is female. This figure is 1 in 8 during peak-time breakfast and drive hours. Furthermore, in co-hosted show, you are nearly 10 times as likely to hear 2+ male presenters as you are to hear 2+ female presenters.

You can check out the International Women’s Day website here.

This year, many radio stations across the world are doing their bit to celebrate International Women’s Day.

Radio Verulam‘s women presenters are taking over the station all days today; all presenters, guests and vocalists on air will be female. Radio Verulam presenter Rosie Macleod said “I’ve loved overseeing the content for the day. Tune in and let us show you just how well women can perform in an industry in which we are so often over looked.” You can tune in via the website here.

Australian radio stations, ABC, Triple J, Double J and Triple J Unearthed, are also putting women in the limelight all day long. They are having women presenters play music by female artists and discuss the achievements of Australian women in the industry. The radio stations are also encouraging their listeners to share their thoughts on the female artists that inspire them by using the hashtag #GirlstotheFront.

Indian radio station, Big FM, has introduced a segment titled ‘Ladies First’ which they will intersperse across all shows. The segment will applaud women who manage multiple roles at home and work and still manage to strike a balance in life.

Google announced this week its new live TV service; YouTube TV. Christian Oestlian, Google Product Management Director, said that YouTube TV has been “designed for the YouTube generation – those who want to watch what they want, when they want, how they want without commitments.”

There are some significant holes in YouTube TV services which is why I’m happy to be sticking to my traditional cable TV.

For starters, YouTube TV has little over 40 channels, and these do not include popular channels such as Comedy Central and Nickelodeon. Additionally, there’s no Discovery Channel or TNT or Cartoon Network. YouTube TV actually offers significantly less choice than traditional pay TV.

Furthermore, YouTube TV will only be available in markets where its existing cable partners have affiliates. Those living in proximity of major U.S. urban centres will not have access to it.

So YouTube TV has no Viacom, Discovery, AMC or A&E, and no CNN, TBS or TNT. And only available in markets where broadcasters have affiliates

YouTube TV has a monthly fee of $35 a month and offers live television content for more that 40 TV networks. How does this compare to regular cable TV? Cable TV offers over 45 channels for an average of $29.95 a month – offering more for less.

BREAKING: My cable bill is already just $35 for more than 40 channels. https://t.co/QI3TBQHLBR

Something else that YouTube’s new service offers which cable does not is YouTube Red. However, I have never heard of it until today, have you? It’s basically YouTube with no ads, offline access and a couple original shows. The subscription service seems to have had little success; the content is limited and who would pay for what they can already get for free?

YouTube TV is not the future; it’s just another portable Freeview box – similar to Sky Go, which has been around since 2006. To me, YouTube TV just looks like a digital version of a mediocre cable package.

This Week in Review has announcement after announcement, with Google announcing a brand new live TV service and Soundcloud revealing a cheaper subscription option. Additionally, Spotify have taken to Twitter to make public the subscriber milestone it has reached and Jacobs Media have released the results of their consumer survey.

Google have officially announced its live TV service – YouTube TV. Christian Oestlian, Google Product Management Director, said that YouTube TV has been “designed for the YouTube generation – those who want to watch what the want, when they want, how they want without commitments.”

SoundCloud Go gives users full ad-free access to over 120 million tracks, with the option of saving offline on mobile. SoundCloud Go+, on the other hand, gives users access to even more songs; over 150 million songs with no previews.

Jacobs Media have revealed the results of their 12th annual national web study of radio listeners. The results have shown a highly evolving radio audience. The results highlighted several interesting points; nearly eight in ten respondents now own a smartphone. Additionally, nearly half of respondents own a Smart TV or one connected with a device like Chromecast or Apple TV.

FREE eBook – A Guide to Getting More Advertisers

Thank you to our 50 million subscribers. #Spotify50 pic.twitter.com/eXkOV71bwu

Check out these statistics on radio station websites to find out what other stations are doing to increase their online engagement.

Take a look at our eBook for more statistics and our comments and analysis. 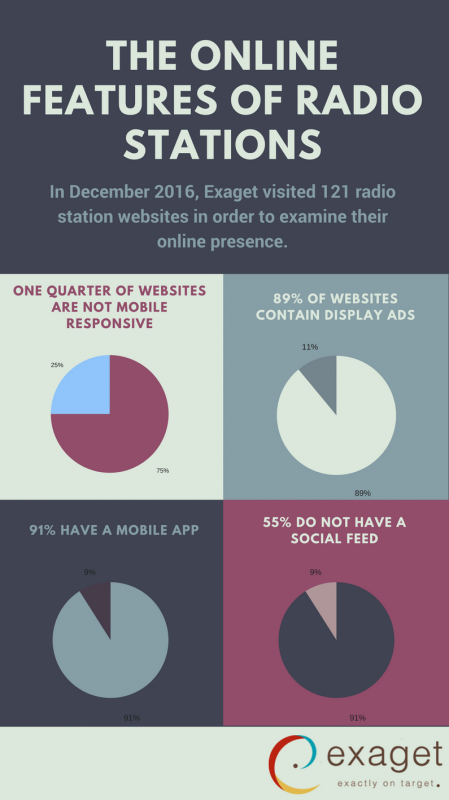 For more stats, check out our eBook.