Advertisers Are Missing a Huge Opportunity in Podcasting

According to data released last week by Edison Research and Triton Digital, recognition of podcasting has increased. Familiarity with the term podcasting, having remained rather static from 2009 to 2015, has shown more than a twenty percent increase in the past two years. Now, an estimated 168 million Americans, 12 years and up, are familiar with the term. Podcasting consumption has also hit a new high, with 40% of Americans having ever listened to a podcast. An estimated 67 million of Americans are now listening to podcasts at least monthly. 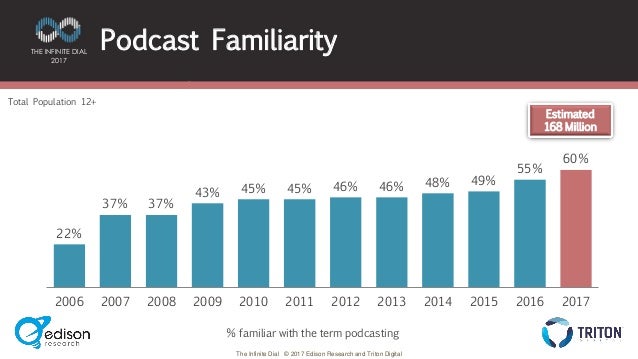 Similar to radio, podcast audience members form relationships with hosts. According to AdAge.com, podcasts can engage listeners in a way that traditional media cannot. Furthermore, the podcasts that people download are carefully selected. Therefore, advertisers can perfectly target their audience depending on passions and interests.

What is interesting about this, however, is that a huge amount of brands are still not seeing the value in advertising with podcasts, even though a study conducted by comScore found that two-thirds of listeners have acted on ads they heard in a podcast either by researching a product or service or by actually purchasing something they first heard about in an episode.

Brands are choosing to stick with the “safer”, more traditional methods, which can often be more costly and time-consuming. Last year, America’s podcasting ad spend stood at a small 167 million dollars. Compare this to TV, where advertisers spent an estimated 72 billion dollars on this platform (Deloitte Global).

The world is turning to podcasts, which can be listened to anywhere – without requiring data usage or an internet connection. The mobility of podcasts means that listeners are consuming loads of content no matter where they are; the gym; at home or on their morning commute; and yet brands are still thinking that television and print media are the best advertising strategies. Let’s not even mention the fact that people find that ads within a podcast the least intrusive when compared with other types of digital adverts (comScore).

On the negative side, podcast advertising today is relatively static. Adverts are embedded within the podcast, so remain the same irrespective of when, where and who is listening to the podcast. However, it does not have to be that way; podcasters who use technologies such as Exaget’s ActiveRadio® enable dynamic advertising and even connect to ad networks to deliver these advertisements real time.